A Poor Sewing Woman's Story of Pain, Poverty, and Privation, Sickness and Sorrow

In the mass of letters recently received by The TIMES was the following: Chicago, Aug. 21 - To The Editor: A poor white slave wishes to thank you for your efforts in behalf of her poor sisters, the shop-girls of Chicago.  I have worked with them for four years and love them dearly.  your reporter was brave indeed when she battled with those terrible bosses.  I fled from them and left my week's work with them unpaid for.  I was a sad coward.  I , the pet sister of two brave solders who gave their lives to free the slaves of the south.  They told me to "take care of another and be good and brave" and I never saw them more.  I took care of mother till she went to her boys, and I have tried to be good, but I can not fight for my rights, and this is the case with many of us.  We will not stand up for ourselves.  Oh, you have not told half: you do know know have we have to bear.  We are indeed slaves, worse slaves than those my brothers died to free. I wish you could see my book for the last month; you would wonder how I have lived.     You have my best wishes for your goodness. May God bless you is the prayer of the white slaves.  Mary McGray -- State street.  P.S. - My hand is cramped with twenty-five years sewing. I can not write very well.      Curious to know something about the home life of the author the undersigned undertook to answer the letter in person.

Description:The Times publishes a letter written in response to the City Slave Girls series, with commentary, as one of two ending follow up articles to Nelson's undercover reporting on working conditions for women in Chicago's factories 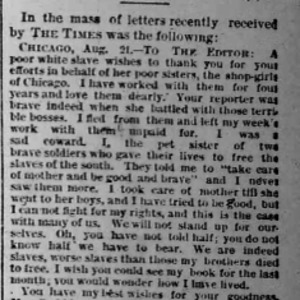 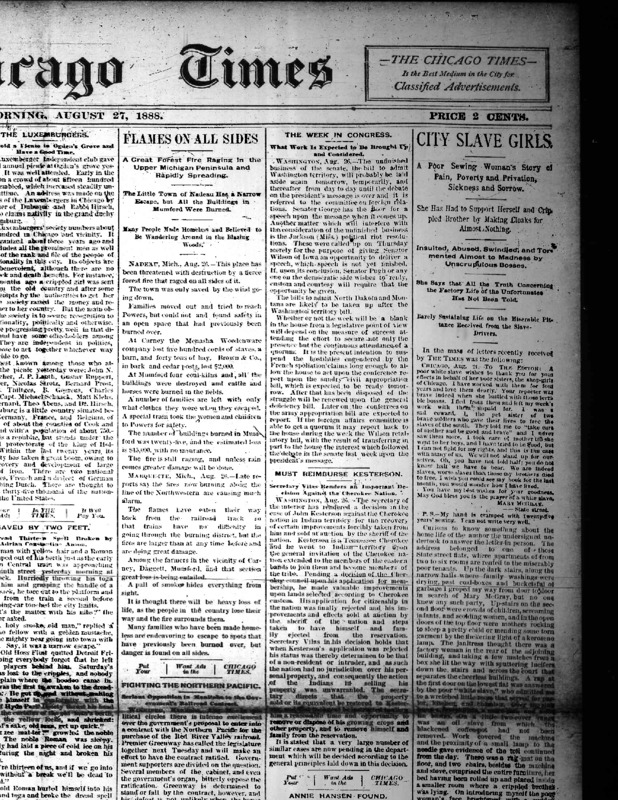