"Infanticide: The Revelation Resulting from an Investigation Made by 'The Times;' Child Murder Committed to an Appalling Extent in Chicago; Leading Physicians and Well-Known Midwives Involved in the Crime; The Lives Choked Out of Little Ones on the Very Threshold of Existence; A Series of Articles Giving Names and Addresses That Will Astonish the People."

"Well, the TIMES has found it necessary to make an investigation into the condition of affairs in Chicago, and the result will be laid before its readers. Horrible crimes are being perpetrated here daily. The victims are the unborn or the born babes of mothers, married and single. They tell no tales. There are no coroner's inquests. They are disposed of so quietly that they do not cause a ripple in the social stream. Prominent physicians and well-known midwives are engaged to commit murders and they commit them without compunction of conscience. Abortions are performed for a price by some of the leading physicians. There are specialists in this line who will choke the life out of a babe at its entrance into this value of ears. The TIMES never publishes anything on hearsay, and never charges a crime upon men or women without giving names and addresses. "In the course of the investigation, some startling, shocking truths will be told. The TIMES has undertaken to crush out a fiendish practice and if a number of people who have heretofore been considered respectable, but who by the most abominable and villainous of practices have subjected themselves to public . . . " 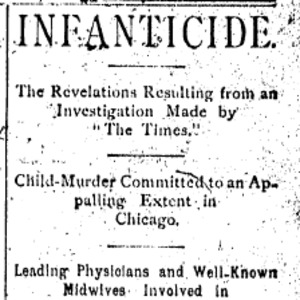