"Dr. Hale's Letter of Introduction to the Young Girl Reporter; It Would Land Her in a Very Respectable Institution Where the Job Could Be Done; His Dose of Pills, Which Were to Be Taken as a Mere Technicality, or Rather as a Blind; The Prescription Given by Dr. T. Heuching, the German Scientist; It Said One Thing, Meant Another, and a Very Serious and Criminal Thing; Some More Physicians Who Would Engage in Child Murder if They Had a Chance; And Some of Whom the Decent People of Chicago May Well Feel Proud; Action of the Chicago Medical Society -- 'The TImes' Indorsed Again"

"Will they or their friends claim that I took unfair advantage of them? How an they? Could I possibly have pleaded as hard as a woman who was really introuble? I could not. I have learned in this newspaper work to dissemble to seem one thing and be another -- and I think I have learned it well. But I cannot feel what I am not. It requires Amelie Rives [ed: prolific poet, novelist] to do that and I am no phenomenal genius. . . . " 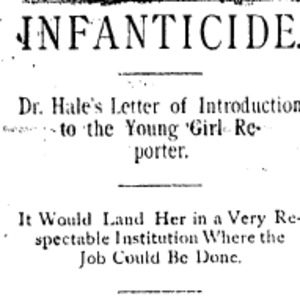