"Dr. C.C.P. Silva Dismissed in Disgrace from His Position as Police Surgeon; Another Retrospective Glance at the Work Accomplished by 'The Times'; The Black List of Unprincipled Physicians Growing Larger Every Day; But men of Sterling Character Are Found in One of the Noblest Professions; Indorsements and Encouraging Letters Pouring In From All Directions to This Journal; The Girl Reporter Continues her Story and Shows Up Another Scoundrel; Dr.s Hale and Chamberlin Make Explanations That Will Hardly Hold Water; A Visit to Colwell's Lying-In Hospital --The Law Concerning the Crime of Abortion"

"Dr. C.C.P. Silva, the surgeon of hte police department who has attracted some attention in the last few days from his prominence in the infanticide articles in THE TIMES, was yesterday summarily dismissed from the public service by order of Mayor Roche. So far as the mayor was concerned, it was a very quiet proceeding, for as near as could be learned he simply sent for Supt. Hubbard and told him to inform the doctor that his services were no longer needed in the department, and that his name had been dropped from the city's pay-roll. The cause of his dismissal was, of course, the position he had been placed in by the investigations now being prosecuted by THE TIMES, and he may be said to have been a victim of his own conduct. . . . " 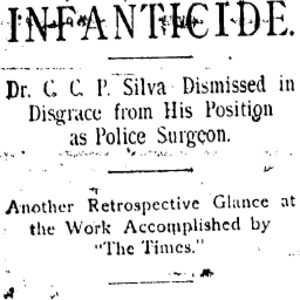