More Bleeding at the Sun-Times

". . . By 1988, when Gaines won his second Pulitzer, the task force and, for that matter, undercover reporting itself were history. For half a year he and reporter Ann Marie Lipinski and associate metro editor Dean Baquet pored over records and conducted interviews, and in the end the Pulitzer board honored "their detailed reporting on the self-interest and waste that plague Chicago's City Council." Gaines focused on zoning--the way it works and how the way it works lines pockets. "The day after the hospital series broke, the board of health held an emergency meeting. The two hospitals soon went out of business, and Gaines and Crawford testified before a U.S. Senate committee. When I asked what the Tribune's pore-by-pore examination of the City Council accomplished, Gaines said, 'That's a tough one. I'd have to say it just educated people to how the City Council worked. It put it all in one big story people could read. I don't think it reformed one thing.' "Neither did the Tribune's eight-month examination of the City Council ten years later--a study the paper in 1997 hailed as a 'fascinating window into the inner workings of government in Chicago.' Gaines worked on that one too. 'I was able to get into even more depth on how zoning works,' he says. 'I think you could do a City Council series every year--every six months.' "The difference between Gaines's two Pulitzers was the difference between bagging an elk with a gun and bagging the whole herd with a camera. . . . "

Description:Miner compares in-depth newspaper investigations at the Chicago Tribune presented with and without a strong undercover narrative element. 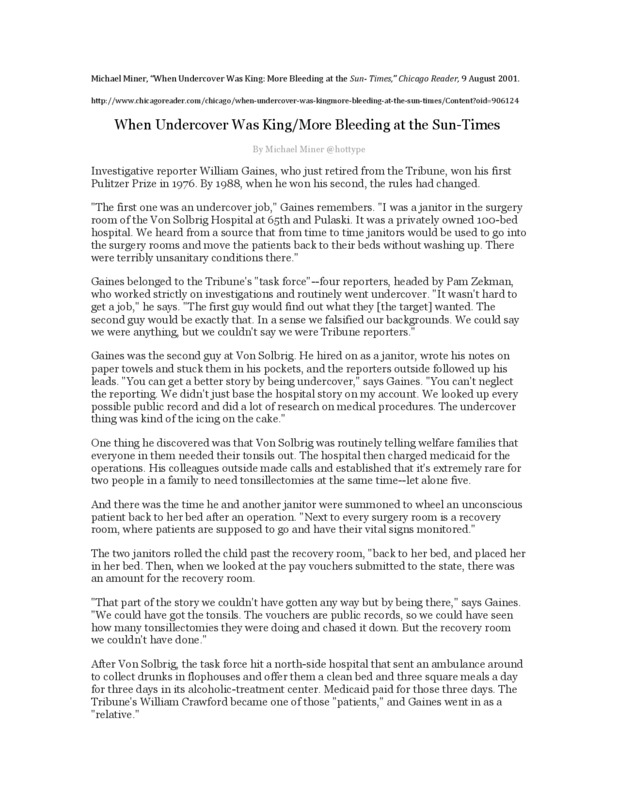