". . . The strange thing about the Mirage series is that a charge of inauthenticity did it in. It was condemned as an antic, a sleight-of-hand unworthy of journalism's highest honors. "A historic project, it had a historic fall. I found the spot in News Values where Fuller talks about the Mirage--it's in a chapter called 'Deception and Other Confidence Games.' "Fuller begins by recalling how he broke in as a police reporter, working with old-timers that Hecht and MacArthur 'used as models for characters' in The Front Page. He wasn't as wily as they were, 'but I did become a passable liar in pursuit of the truth.' "He admits to the 'thrill' he'd personally felt going undercover. 'Deception carried a hint of danger that ordinary investigative techniques simply did not have. Perhaps I sensed something forbidden about it, the secrecy, the betrayal. Or perhaps it was the recognition that deception invites rage and retribution. The feeling was not entirely pleasant, but still when it was over, I wanted to feel it again.' "That's how we talk about sin. Fuller's notion of journalistic sin is more expansive than mine, and when it occurs he's less willing to forgive it. News Values is up to the important business of setting journalism on a new foundation more honorable than the old, but Fuller sweeps undercover journalism into a bin with a lot of old-time techniques we can agree were outrageous, like stealing photos and posing as a cop. . . . "

Description:Miner opines on Jack Fuller's book, News Values, and, among other things journalistic, the Chicago Sun-Times' Mirage Tavern expose of 1978. 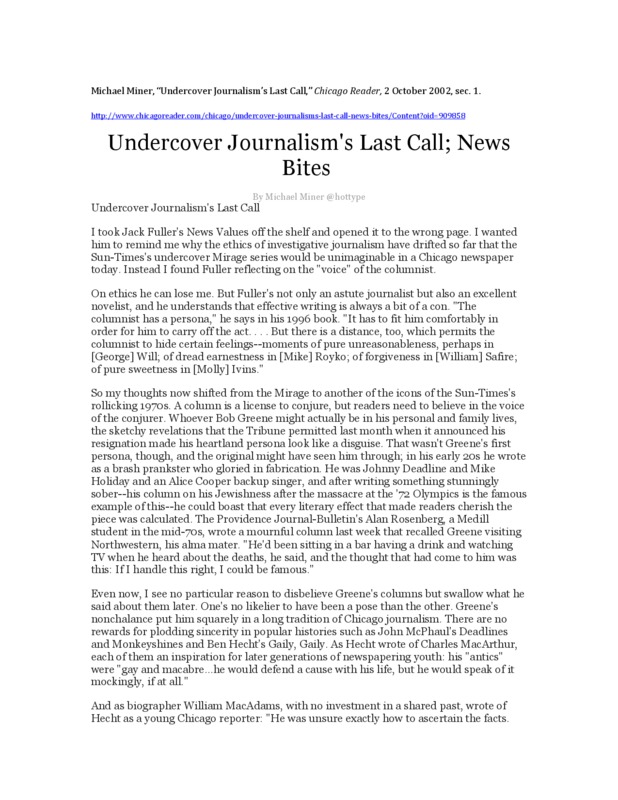