"Is It Ever OK for Journalists to Lie?" - Jack Shafer - Politico

What the latest Project Veritas flop can teach us about undercover media work.

"Veritas had previously punk'd lefty activist groups and non-journalistic employees at NPR. But in its attempted sting of the Washington Post, Veritas went directly at the paper's reporters with a female operative selling a fictitious story that she had been impregnated by Alabama senatorial candidate Roy Moore as a teenager. The Post's reporters saw through her flimsy deceptions, counter-stinging her and Veritas with a bundle of fine reporting and thus proving the opposite of the organization's hypothesis: the Post had no overwhelming bias against Moore, and it exercised skepticism and thoroughness in reporting an allegation brought to its attention.   While outrageous, the depth of Veritas' undercover deception is not unprecedented, even in contemporary journalistic circles. In 2007, investigative journalist Ken Silverstein went undercover for Harper's magazine as a business executive who intended to hire lobbyists to skirt the law in helping him reform Turkmenistan's poor international image. In 1992, ABC News producers told Food Lion a passel of lies to secure jobs at the supermarket so they could film a story about the chain's substandard health practices. In 1963, Gloria Steinem submitted a fake name and Social Security number to get a job as a Playboy bunner for expose in Show magazine. . . .

Description:Project Veritas went undercover and got buried in its own muck this week. Although the organization garnered few defenders inside or outside of journalism, its nutty ploy reprised the century-and-half-old debate over the uses of this kind of deception in reporting. https://www.politico.com/magazine/story/2017/11/30/fourth-estate-project-veritas-james-okeefe-215991 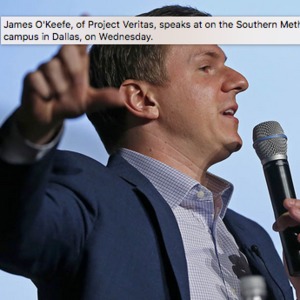