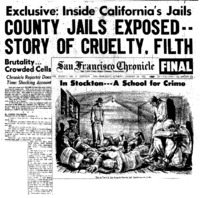 Pierre Salinger goes undercover in two California jails (with pre-arranged faux arrests) to investigate conditions throughout the state penal system, as part of a major series for the San Francisco Chronicle. Salinger also did a follow-up series.

In the Pre-Dawn, a Man is Marked Up for Life

A man, moaning loudly somewhere outside my cell block, woke me suddenly that Saturday night in the Kern County Jail at Bakersfield.

Duggan, "The Duke," a tall, thin dark-haired alcoholic met me as I walked into block "Left Three" of the Kern County Jail at Bakersfield on a sunny Friday morning two weeks ago. He was the assistant Tank Judge.

"A 23-year-old electrician, convicted of drunk driving, was shoved into a large tank cell in a Southern California County Jail two weeks ago. A squat man, languishing on the lower bunk of one of the small cells inside the tank rose to his feet. . ."

"It was in 1941 that Al, an 18-year-old from San Joaquin Valley, came to San Francisco to see how he could make it out on his own in the big city. He was broke and friendless. One day, he spotted a new red bicycle in front of a house out in the avenues. He needed transportation, so he stole the bike. It was the first time he had ever committed a crime of any sort. Two days later, he was caught. . ."

"I heard a heavy jail door clang behind my back two weeks ago. A Stockton policeman firmly led me by the arm to a battered desk. An inmate trusty looked at me unsmilingly and said: 'Empty your pockets on the desk' . . ."